One day early in Zidane’s first spell as Real Madrid manager, Casemiro knocked on his door. He hadn’t played yet — five games had passed — and he wasn’t happy. Play me, he said, please. Zidane looked at him, told him to calm down and said that once he started playing, he would never stop. Zidane was right, so much so that it became almost a running joke. After one game recently, Casemiro was asked if he was ever going to rest. By way of a response, he offered that cherubic smile he has and said something about how he didn’t need it. Zidane didn’t think so, either. You only ever leave Casemiro out to ensure that you can put him in.

the tactical beauty of having an omnipotent ball winner player such as Ndidi in your squad is that he allows you to shove an extra attacker onto the field without losing much (if any) defensive solidity.

Roy Hodgson reflects on his time at Inter, and Javier Zanetti. From The Coaches Voice

Javier wasn’t even signed to be the big player he became – he made himself into that. He had an incredible professionalism and desire to make the very best out of himself. Whatever his coaches or fitness coaches wanted him to do, he was going to show he could do it. 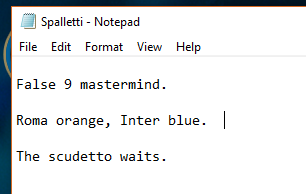 Nothing like a tactical breakdown to get you through the international break. Lee Scott on last week’s Roma Inter match up.